It was a relatively warm day on October 3rd when I took the J train all the way downtown and got off at Broad Street. I passed by government-level security gates at the beginning of Wall Street, and found myself walking down an old cobble road towards the towering neoclassical facade of the New York Stock Exchange.

Tourists lined the sidewalks, and gawked in amazement at the architecture and landmarks before them. The streets were dotted with stores like Hermès, Tiffany & Co., and of course, Starbucks, serving as constant reminders of our presence in the womb of capitalism. I walked southeast down Wall Street, passed by an enormous Trump building to my left, and set out towards the destination of my excursion: New York’s Municipal Slave Market.

This was not my first time in the Financial District, but it was the first time since receiving an education in which I was able to view my city through a critical perspective, normally overseen . While it is common knowledge slavery in America had begun with the arrival of the Dutch to New York City in the mid-1600s, few people know that Wall Street had also served as one of the earliest and largest slave markets in America¹. Eighty-one years before the New York Stock Exchange itself had been established, Wall Street had been designated as the first officially recognized slave market of New York in 1711².

The large population of enslaved peoples had made white residents uneasy. They had feared that the enslaved peoples’ ability to walk around the city unsupervised would have allowed too many opportunities for unionization and rebellion. Thus, after complaints, The New York Municipal Slave Market had been created for thousands of enslaved Africans, and some Natives, to have been bought and sold it in order to further control and inhibit unity and revolution. The visual terrain of Wall Street still serves as a constant reminder to this foundation. I couldn’t help but notice that almost the entirety of the pedestrians in this district were either rushed business people or awed tourists, all of which were white.

Just like many critical sociological conversations, the story of Wall Street begins with the invasion, genocide, and colonization of the Native peoples. Their stolen land is where New York City sits upon. Through the racial formation of African peoples, European settlers had found it justifiable to enslave them under theoretical racial concepts like ‘natural hierarchy’ and ‘white man’s burden’. While New York City is now praised for its outwardly equal and progressive reputation, it is quite obvious while I walked around that racial and economic inequality had been built into the urban planning of this city. The Financial District is no exception.

The racial geography of FiDi is still representative of Wall Street’s history. Being the epicenter of finance in America, it should be no surprise that the median income for the area is around $124,000³. The racial demographics of this neighborhood are composed of 64% white residents and just 3.2% being Black residents⁴, illustrating race and economic status have had an intertwined and codependent relationship with one another that has been rooted in history. Slavery has made a permanent mark on Black Americans here⁵. Evident in current racial geographies and wealth gaps, the bedrock of American slavery has reproduced centuries of economic and political subjugation. There is little confusion on why this neighborhood, which had housed one of the first slave markets in American history, only has a Black population of just 3% over 300 years later.

I was lost in the maze of soaring skyscrapers and occasionally tripped over myself while staring up at the seemingly endless structures. Eventually, I stumbled upon a quiet little garden surrounded by concrete, a subtle reminder of nature’s impermanence in this city. In the center of this rather dull garden was a green sign, unveiled just seven years ago by Mayor Bill de Blasio in 2015. It read “New York’s Municiple Slave Market”; this was the official homage to the Wall Street atrocities, a tiny and insignificant sign barely bigger than my backpack. It was quietly tucked away under some trees in a small green space, dwarfed by the skyscraper it kneels before at 100 Wall Street. I found this inadequate gesture of recognition offensive and insulting to the scope and truth of America’s horrific past. However, it makes sense that only a small and unnoticeable sign was erected in acknowledgment of this history. Any larger monument in the heart of Western capitalism would make apparent an unfavorable reminder: the greatest invention of capitalism was slavery. 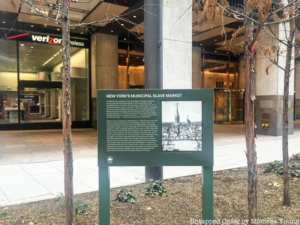 Cailean Shelley is a second year Interdisciplinary Studies masters student at New York University’s Graduate School of Arts and Sciences XE Department of Experimental Humanities and Social Engagement. Cailean is a sociologist and critical theorist. Their work aims to critically analyze normative American notions of culture, history, and power through challenging whiteness, social stratification, and exposing the legacies of slavery and colonialism.