Skip to content
Previous Next
Four Views from a Camouflaged Shack 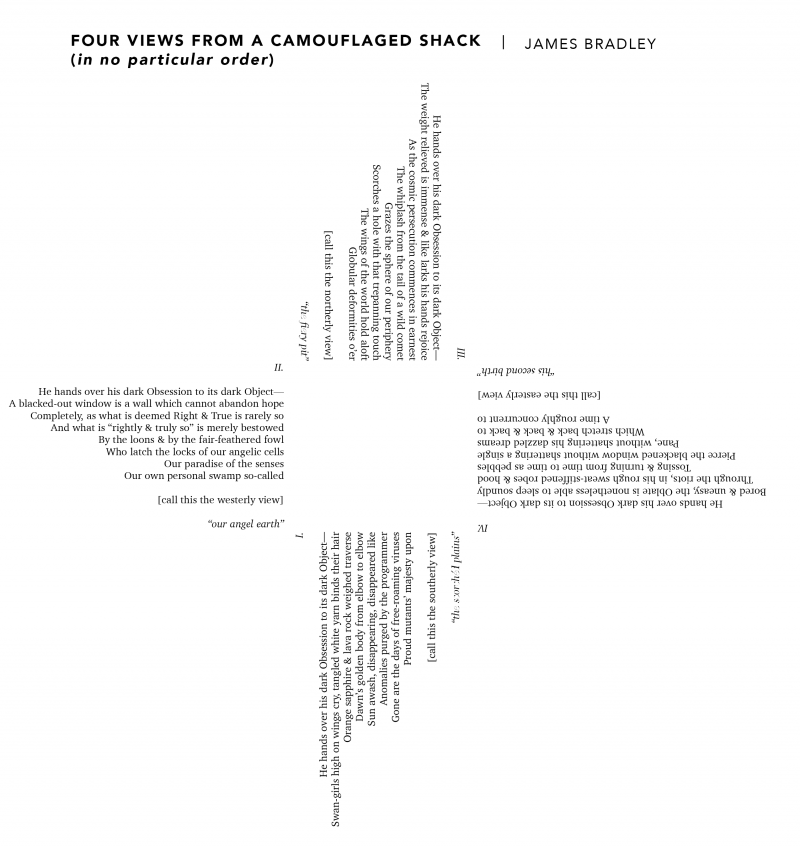 Four Views from a Camouflaged Shack
(in no particular order)

[call this the southerly view]

He hands over his dark Obsession to its dark Object—
A blacked-out window is a wall which cannot abandon hope
Completely, as what is deemed Right & True is rarely so
And what is “rightly & truly so” is merely bestowed
By the loons & by the fair-feathered fowl
Who latch the locks of our angelic cells
Our paradise of the senses
Our own personal swamp so-called

[call this the westerly view]

[call this the northerly view]

He hands over his dark Obsession to its dark Object—
Bored & uneasy, the Oblate is nonetheless able to sleep soundly
Through the riots, in his rough sweat-stiffened robes & hood
Tossing & turning from time to time as pebbles
Pierce the blackened window without shattering a single
Pane, without shattering his dazzled dreams
Which stretch back & back & back to
A time roughly concurrent to

[call this the easterly view]

James Bradley is an artist and writer living in Portland, Oregon. His paintings have been exhibited at the Berkeley Art Museum, the Verge Art Fair, and elsewhere. He co-edits Hexagon Press with his wife.